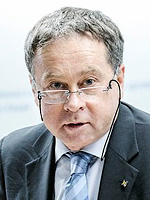 Gabriele began his banking career at “Credito Italiano” in 1990 and joined Banca Popolare Etica in 1998 where he held a number of positions including: deputy Managing Director from October 1998 to 2011, Director of Sales and Institutional Affairs from 2011 to May 2013, Director of Credit, Institutional and International Affairs since 2013, now is in charge of the international development activities of Banca Etica. Appointed Officer of the Italian Republic in 2000 as among the founders of Banca Etica by the Italian President Carlo Azeglio Ciampi, he is currently President of Cresud (the Banca Etica’s Group financial tool dedicated to microfinance and fairtrade). He served as a member of the Board of Etica SGR (Banca Etica Group Investment Company) from 2002 to 2014 and as a member of Libera Terra Mediterraneo (cooperatives working on the grounds confiscated to mafia) until 2020. Board member of Coopest and Coopmed. Married, three sons, his wife Elisabetta Viscardi is a pediatric oncologist at Padova General Hospital and still shares with Gabriele a long-term social experience in the Italian Catholic Scout Movement (Agesci).