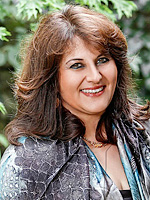 Shiva Dustdar has over 28 years of experience in the financial industry working for large private and public institutions in New York, London and Luxembourg. Since joining EIB in 2003, she has worked in risk management, lending, investing and advising in innovative companies. Shiva currently heads the Innovation Finance Advisory (IFA) Division in the EIB which she built and scaled up into a successful innovation financing advisory programme covering green, digital, gender-smart and health-related sectors.

She will take on her new role as Dean and Head of the EIB Institute in mid-June 2022.