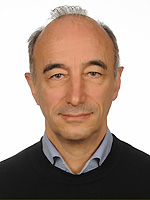 Umberto Del Panta is the Head of EIB Representation to Turkey since January 2021. He has a banking experience of almost forty years. At the EIB, he served as Head of Operations for Central Asia, as well as – earlier – as Senior Banker for operations in Ukraine, Russia, and several EU countries. Before joining EIB, he worked with international institutions such as Bank for International Settlements, Citibank and the Black Sea Trade and Development Bank (BSTDB).